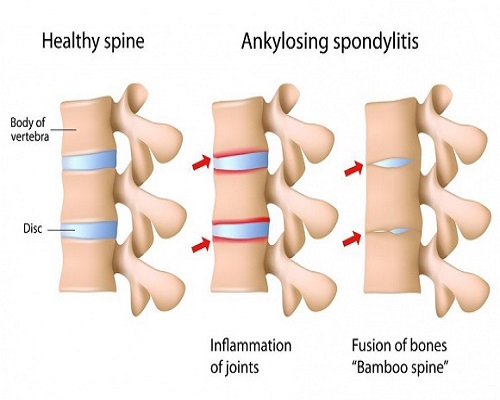 Ankylosing spondylitis is an inflammatory disease that causes some of the bones to fuse which then affects the spines flexibility and also the body posture of the patient. It is mostly observed that men are more prone to it than women. The symptoms of the disease can be observed from adulthood.
It mostly affects:
1. Lower Back
2. The base of the Spine and Pelvis
3. Vertebrates in the lower back
4. Joints in Spine
5. Heels
6. Pelvis
7. The cartilage between the breastbone and ribs
8. In severe cases formation of new bone

In severe cases, a new bone is formed in this new bone bridges the gap between vertebrae and eventually fuses sections of vertebrae. Which later become stiff and inflexible. In some cases it stiffens your rib cage, restricting your lung capacity and function.

Causes:
There is no specific cause, but it’s said genetic factors may also affect it. People having a gene called HLA-B27 are at a greater risk of developing ankylosing spondylitis. But not every individual having it may suffer from it. It is observed more in men as compared to women specifically during adulthood.

One such case study is about Ankylosing Spondylitis in a young patient. During the initial examination, Dr. Pravin Patil a rheumatologist in Pimpri Chinchwad diagnosed symptoms of Ankylosing Spondylitis in a very young patient. He then came up with a remedial plan of action considering the patient’s age and condition. It was then observed that the patient was responding excellently to biologics injections. In such cases, Patients can walk without support and lead a fairly normal life post-treatment. Biological injections should be considered as a treatment option in patients who are not doing well on conventional medications. Biological injections are prescribed by Rheumatologists who have experience in using this relatively new therapy. In this case, the patient has visibly gained a lot post-treatment by Dr. Pravin Patil. Who is known for his impeccable contribution in the field of Rheumatology & Ankylosing Spondylitis. He is one of the best rheumatologist in pimpri chinchwad.

What Kills Patients with Rheumatoid Arthritis?

I have been diagnosed to have Rheumatoid arthritis. What next?